The Pleasures of the Corbières

and of the Fitou wine region

Provence is overwhelmed by holiday crowds but to the West there is the ancient land of Occitania, still unspoiled and tranquil and where you can savour local pleasures and life in a Domaine. 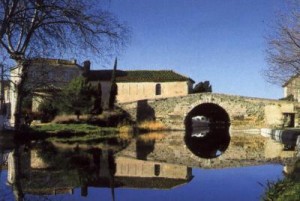 This unusually named region has always been isolated. It is still in the Midi, but without the large number of holidaymakers who seek the sun and the sea in other areas of the South. Here you will find a land of sun and ever-changing light, old fortress castles with a legendary past, perched on mountain tops, and scattered picturesque villages where older people sit and gossip in the shade of the plane trees their voices barely heard above the murmur of the fountain.

Imagine valleys planted with vines, slopes covered by the ‘Garrigue’*, the crests of the hills lashed by the ‘Cers’**, where the encircling horizon is lost from sight. Where the beaches and ‘Etangs’*** are protected from urban development and to which the only visitors are the rose pink flamingoes.

At the moment this area remains unspoilt although, as in the case of other parts of the south, it could be taken over and flooded by those who wish to experience a newly fashionable area.

Here life is still lived as it always has been and a little outside time. You will not find large palaces, or famous, fashionable restaurants, or golf courses, or health spas. There is nature, rocks, wind and some cypresses. On the peaks, which suddenly appear stand the ruins of Cathar castles (dating in fact from before the Cathar period of the 11th/12th centuries although they did provide refuge for Cathar ‘Parfaits’), frontier posts separating the Kingdom of Aragon from the lands of the Count of Toulouse. They were the last bastions of Occitanian independence, and the heroism of their resistance would immortalise them even without the massacre and persecution of the Cathar religious dissidents which wiped out a civilisation. Eight centuries later the tragedy still leaves traces and an impression of evil. In more modern times the Languedoc is less troubled but there were the economic struggles of the wine growers in 1907.

The Corbières, a land of war and misery, has suffered a lot but that was a long time ago and now times have changed. It is still savage and difficult to cultivate although it is bathed in warmth, full of wild flowers, shrubs, herbs, strong scents and ever changing light. Provence was once like this. Those who live here enjoy all that a generous nature places at their feet.

* Garrigue: rough, rocky uncultivated ground, usually limestone, on which can be found such plants as green oak, gorse, sarsperella and box, and is the result of the destruction of the Mediterranean forest.

** Cers: a wind coming from a westerly or north westerly direction which is often dry and cold and frequently violent. It can also be called by the Catalan name Tramantane. In other areas of the south a similar wind is the Mistral.

*** Etangs: saltwater lagoons separated from the sea by strips of land